A skyliner sounds like a name for a commercial airliner but it is the name of a high speed train between Narita airport and Tokyo. Why did I find this interesting to post about, well first of all I didn't know I had been on it until I saw it advertised on the TV, my wife told me we had been on it, how would I know I was just off a 12 hour flight, been up since 4am that day and just wanted to sleep. I do remember it was a quick ride in to Tokyo. What is of interest is this is a high speed train on conventional subway train tracks. (Shinkansen has special tracks for the high speeds) It was ultra quiet, ultra smooth and very slick inside, you wouldn't expect anything less from the Japanese.

If you are coming to Tokyo I recommend it!


Skyliner travels the Narita Sky Access Line at maximum 160 km/hr, connecting Nippori and Airport Terminal 2 stations in 36 minutes. Compared to the former Keisei Main Line route in 51 minutes, we shortened the travel time by 15 minutes, thus achieving a great time saving.
The speed of 160 km/hr is the fastest among Japan's conventional trains. With introduction of Skyliner, world-class international airport access comparable to European or North American airports.
Check out the website http://www.keisei.co.jp/keisei/tetudou/skyliner/us/skyliner.html 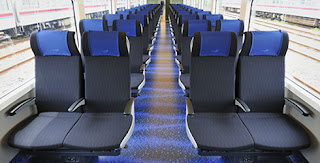